BARNSTOCK is honored to present master saxophonist and Grammy winner, Joe Lovano to the stage on Saturday, August 20th @ 8pm. We hope you can join us for an exploration in sound, in this intimate listening room in Woodstock! 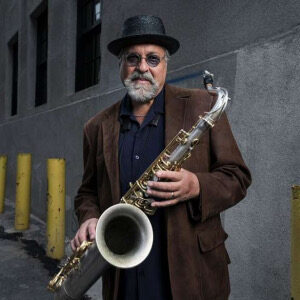 JOSEPH SALVATORE LOVANO
was born in Cleveland, Ohio on December 29, 1952 and grew up in a very musical household.
“My dad was a fantastic saxophone player with a really deep passion for the music. I grew up with his record collection and when I was a teenager, he’d bring me around to rehearsals and jam sessions”
After high school, Joe attended Berklee and his college years were pivotal, a precursor of future collaborations and career opportunities. Joe had been searching for a way to incorporate the fire and spirituality of late-period John Coltrane into more traditional settings and at Berklee, he found it, discovering modal harmony.
Post-Berklee, after six weeks on the road backing Tom Jones, Joe returned to Cleveland. With his reputation ascending, he soon got the call from Dr. Lonnie Smith, who was living in Detroit at the time. Joe joined the organist for a series of gigs in the Motor City, as well touring on the Chitlin circuit in 1974.
A six month tenure with Brother Jack McDuff and the Heating System was next. The album Joe recorded with Dr. Lonnie Smith, Afrodesia, started getting a lot of airplay on Jazz radio across the country at that same time, resulting some early name recognition when Joe worked new clubs with McDuff.
A few months after he relocated to New York, Joe joined Woody Herman’s 40th Anniversary tour in 1976, which included “The 40th Anniversary Concert” at Carnegie Hall. For his second Carnegie Hall appearance, Joe shared the stage with Stan Getz on the classic Early Autumn, and was a featured soloist during the celebration, along with Frank Tiberi, Zoot Sims, Al Cohn, Jimmy Guiffre and Flip Phillips.
In 1981, Joe began playing with Paul Motian, in a Trio that included guitarist Bill Frisell. The group has just celebrated their 20th year together. Working with Motian helped Joe gain further exposure and renown, particularly in Europe.
“Paul Motion has always been one of the most creative improvisers in this music. Playing with his band since ’81 has helped give me the confidence to produce the subsequent recordings I’ve done. Playing in the world of music is what I’ve learned over and over from Paul.”
Paul Motian: “Joe’s provided the magic in my bands for over 20 years, he’s been a tremendous asset. I heard his potential over twenty years ago and we’ve been playing together ever since. He’s been a tremendous help to me, He has a fantastic memory, he remembers all the shit, it’s incredible.”
Joe’s next high profile gig that brought him more national and international attention was with guitarist John Scofield’s Quartet, with whom he recorded and toured from 1989 – 1993.
John Scofield: “Joe is very sonically aware – he thinks about the effect different instruments and different personalities will have. He was perfect for what I was doing – his sense of swing and his tone reminded me of the older guys, in a really positive way.”
In 1991, Joe Lovano signed with Blue Note Records and since then, has been leading his own groups, producing nearly twenty-five recordings as a leader and becoming one of the great Jazz artists of our time.
Bruce Lundvall, Blue Note Records: “When I saw Joe Lovano in Peter Erskine’s Band in the late 80’s, I offered to sign him on the spot. The first time I heard Joe Lovano I felt that he was the most creative and hard swinging tenor player I’d heard in years. Joe has emerged as a giant on his instrument and a full fledged giant of jazz.”
In 2000, Joe won the Grammy Award for his 52nd Street Themes album, featuring his Nonet with arrangements of Tadd Dameron’s compositions. He also released On This Day: Live At The Village Vanguard and Streams of Expression featuring the “Birth of the Cool Suite” written for Lovano especially for this album by Maestro Gunther Schuller.
In 2018, Joe signed with ECM Records and recorded his first release as a leader on ECM called Trio Tapestry featuring Marilyn Crispell and Carmen Castaldi.
Throughout the 2010’s, Joe toured the world with his Classic Quartet, Trio Tapestry, Us Five, Village Rhythm Band, Sound Prints, The Spring Quartet (with Jack DeJohnette, Esperanza Spalding, and Leo Genovese), Saxophone Summit, with John Scofield, Chucho Valdes, Diana Krall, and many more.
Today, Joe and Judi live in the Hudson River Valley area of upstate New York. Although he’s busy touring and recording.  Joe continues to compose and vibrates on tonalities throughout the day and lives a creative life of music. 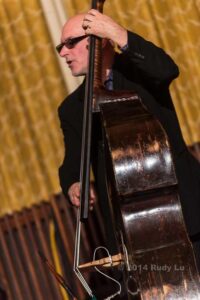 JOHN MENEGON
New York City bassist John Menegon started his career playing bass in Montreal. After having worked for several years on the Canadian jazz scene with the great guitarists Sonny Greenwich, Mike Gauthier & Nelson Simons, and saxophonists Steve Grossman & Pat LaBarbara, he went on to hone his skills in NYC in the mid-80s. Since moving to New York to study Jazz at Long Island University on a full scholarship, John has performed/recorded with Dewey Redman, David “Fathead” Newman, Matt Wilson, Frank Kimbrough, John Hicks, Yoron Israel, Jack DeJohnette, Kenny Burrell, Joel Frahm, Pat Metheny, Kenny Barron, Paul Bley, Anthony Braxton’s Tri-Centric Orchestra, Nick Brignola, Jimmy Cobb, Al Foster, Slide Hampton, Sheila Jordan, Lee Konitz, Joe Lovano, and many others.
In addition to touring, recording, and composing, he has created and taught Jazz Workshops on the music of Jaco Pastorius, Miles Davis, and Charles Mingus at Williams College (Williamstown, MA). He has also taught master classes at Jazz Festivals around the world, including the Panama Jazz Festival, Bolzano, (Italy) and San Miguel de Allende.
Menegon’s release “Blew By Blues” with his group “Quartet East” was released on Dot Time records in 2017 and features John on bass, Joel Frahm on tenor/sop sax, Frank Kimbrough on piano, and Steve Williams on drums, with special guest vocalists Teri Roiger, Judi Silvano, Sarah James and Maryanne de Prophetis.
Review from The Paradiso Cafe, Ottawa, Canada with JOHN ABERCROMBIE:
”Menegon, best-known for his work with two now-departed and almost diametrically opposed saxophone greats in the latter parts of their careers—Dewey Redman and David “Fathead” Newman. With a robust tone that supported deep, resonant low notes as much as it did lither excursions in the instrument’s upper register, Menegon created both a pliant and unshakable foundation, and an equal extemporaneous partner who, as much as anyone else in the quartet, pushed and pulled the music to new and unexpected places.”
“A fine carpet of swing laid by bassist John Menegon sets the jump-blues feel on Menegon’s tune Bu Bop Bass just right on Newman’s latest CD Cityscape #1 on JazzWeek Charts!” Andrew Rowan, AllAboutJazz-New York
“John Menegon’s offerings on upright bass flowered with generous solo escapades to engrossing feats of accompaniment.” METROLAND 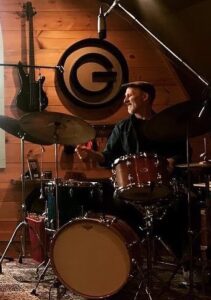 MATT GARRITY
Drummer Matt has been on the New York City music scene since 1994. He has performed with some of the best in the business, including Grammy winner, Vincent Herring, David Williams, Teri Thornton, Peter Bernstein, Gary Versace, Ron McLure, Joel Forrester, Ed Cherry, Ben Monder, Ratzo Harris, John Stetch, Jeremy Pelt, Steve Slagle and Jerome Richardson, among others.
Matt attended William Paterson College’s jazz studies program in the early nineties. He has studied with renowned performers/ educators John Riley, Horacee Arnold, Rufus Reid, Harold Mabern, Carl Allen, Bill Goodwin, and Ed Shaughnessy, among others.
Matt has performed in notable New York venues such as The Blue Note, Birdland, Smalls, Smoke, Minton’s Playhouse, The Jazz Standard, The Kitano Hotel, and The Knitting Factory.
He has also toured the U.S. including Northwest tours with pianist, Clay Giberson, a summer jazz series at The Baltimore Museum of Art with Grammy winner, Vincent Herring’s Quartet, Midwest shows with master Brand X bassist, Percy Jones and West Coast tours with the prolific pianist and composer, Joel Forrester.
Matt has been a full time member of pianist/composer Joel Forrester’s working trio and quintet for close to 20 years. Forrester, who was recently featured in Downbeat Magazine, composed the theme for National Public Radio’s “FRESH AIR” with Terry Gross and is also a founding member of The Microscopic Septet. Matt has recorded three albums with Forrester on The Ride Symbol Record label.
Garrity is also featured on pianist Clay Giberson’s recording, “Spaceton’s Approach” on Origin Records. In addition to national radio play, ALL ABOUT JAZZ calls it “One of the top piano trio efforts of the year.”
Since 2017, Garrity has been producing Barnstock, a jazz series featuring recording and live streaming from his studio in Woodstock, NY. The space is set in the top floor of a renovated 1911 barn. It’s a warm, intimate setting for hearing some of the best musicians on the scene. The new outdoor stage under the tall pine trees have added a whole new magical element to this series, and has been quickly gaining popularity.
Matt has been a proud endorser of SABIAN CYMBALS since 2009.
“Drummer Matt Garrity, always fluidly shifting from staccato fill patterns to soft accompaniments in just the way the composition seems to need.” -All Music Guide
“Matt is a swinging drummer and true keeper of the flame.” -Vincent Herring, saxophonist
“A low thunder rumble of drums punctuated by cymbal lightning flashes as the intensity level builds before a fade into a restrained yet rollicking Garrity drum solo.” -All About Jazz
**THE CONCERT** 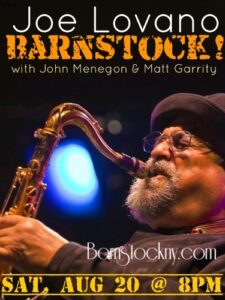 BARNSTOCK is a monthly jazz series in Woodstock, NY. Run by drummer Matt Garrity, the space is set in the top floor studio of of a renovated 1911 barn. It’s warm, intimate setting makes for the perfect listening room. Come hear some of the best musicians on the scene in the coolest house concert you’ll ever go to!
86 Baumgarten Rd. Woodstock, NY
STREET PARKING ONLY
2ND FL ENTRANCE
SUGGESTED DONATION @ THE DOOR
**RESERVATIONS RECOMMENDED**
garritydrums@gmail.com
+ Google Calendar+ iCal Export