Drummer Matt Garrity will team up with FOUR of his fellow Ithacans for a monumental Barnstock blowout! Saturday night, July 24 @ 7pm at Barnstock!
Playing a selection of groovers from Eddie Harris, Cannonball Adderley, Freddie Hubbard and a few originals.
These 5 have all played in various configurations over the years but miraculously never all together!
Sure to be a great night of music!
Paul Merrill- trumpet
Todd Horton- trumpet
Peter Dougan- guitar (Woodstock’s own)
Dan Janis- bass
Matt Garrity-drums 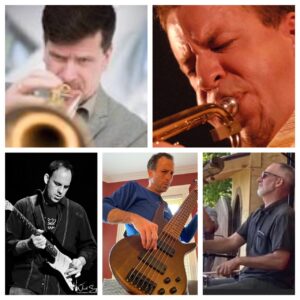 “Horton is a first when it comes to moods and grooves.” JazzReview.com

Over the past 25 years, Todd Horton has performed and recorded with renowned artists such as Ani Difranco, Buddy Miles, Spin Doctors, Aaron and Ivan Neville, Phoebe Legere, Richard Bona, Oumou Sangare, Bob Dorough, Arnie Lawrence, Maceo Parker, Hiram Bullock, Adam Holzman and many, many others. He has written hundreds of compositions for his own groups, other musicians, choreographers and filmmakers. In 1999, he co-founded Soulsearch Music, a boutique production company and micro label for which he has produced and co-produced dozens of original recordings with unique artists. Still at large on the east coast and worldwide.

Trumpeter, composer, and educator Paul Merrill has been performing since the age of 10. As a teenager he performed the Goombay Jazz Festival (Bahamas) with his quintet Interplay. In 1995 Merrill won a Downbeat award for his performance with the New Jazz Ensemble directed by Rufus Reid. He has toured with Hank Roberts, Half Pint, John Brown’s Body, and the Grammy nominated Phil Woods Big Band. As a trumpeter and/or big band director he has performed and collaborated with Vincent Herring, Terell Stafford, Maria Schneider, Brian Lynch, Rufus Reid, Wycliffe Gordon, Eric Alexander, Carl Allen, Kevin Mahogany, Darmon Meader, Claudio Roditi, and Steve Gilmore, among others, while recording and arranging for Schanachie and I-town Records. Merrill’s trumpet can also be heard on such films as Suckerfish, (Jury Award winner at the Santa Barbara Film Festival) and The Substitute II (HBO). He has recently been awarded a third commission with the Commission Project (TCP) for Chad Lefkowitz-Brown and his compositions continue to be performed by many college and high school ensembles. Currently pursuing a DMA in Jazz Studies and Contemporary Media at the Eastman School of Music, Merrill remains active as a clinician, Area All-State director, improvisation teacher, freelance trumpeter, and member of the Central New York Jazz Orchestra. He holds a B.M. in Jazz performance from William Paterson University, M.M. in performance from Ithaca College, is currently the Gussman Director of Jazz Ensembles at Cornell University, and former faculty at Ithaca College School of Music.

Drummer Matt has been on the New York City music scene since 1994. He has performed with some of the best in the business, including Grammy winner, Vincent Herring, David Williams, Teri Thornton, Peter Bernstein, Ron McLure, Ben Monder, Ed Cherry, Ratzo Harris, John Stetch, Jeremy Pelt, Steve Slagle and Jerome Richardson, among others.

Matt has performed in notable New York venues such as The Blue Note, Birdland, Smalls, Smoke, Minton’s Playhouse, The Jazz Standard, The Kitano Hotel, and The Knitting Factory. He has also toured the U.S. including Northwest tours with pianist, Clay Giberson, a summer jazz series at The Baltimore Museum of Art with Grammy winner, Vincent Herring’s Quartet, Midwest shows with master Brand X bassist, Percy Jones and West Coast tours with the prolific pianist and composer, Joel Forrester.

Set on the stage in the great lawn amongst the natural cathedral of pines behind the 1911 renovated barn in Woodstock, NY. This is an absolutely perfect, serene setting for live music. You have to see it and hear it to believe it!

In case of rain, we’ll be in the upstairs loft entrance of the barn!