Barnstock is proud to present guitarist/ vocalist, SCOTT SHARRARD to the stage on Saturday, Oct. 24 @ 3pm for the final outdoor concert of the season! Joining him will be a stellar lineup of the best the Hudson Valley has to offer.

“One of the best guitarists in the country.” -BILLBOARD MAGAZINE 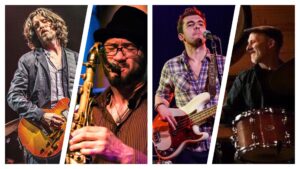 is best known as lead guitarist and bandleader for the late Gregg Allman. But his personal artistic journey – which includes singing, songwriting, producing and arranging – began long before he first teamed up with the rock icon. “I basically have a rock ’n’ roll band,” Sharrard explains. “When I was growing up, I loved bands like Little Feat, Led Zeppelin and the Allmans. They would explore so many styles and experiment. That’s something I have always tried to embrace, and that’s how I want to present my music today. This is what I tried to do with Gregg. Now I’m continuing that as a solo artist.”

One of the most sought-after touring musicians in American music, Jay is perhaps best known for his saxophone and flute work with many artists including Gregg Allman, Allman Brothers Band, Levon Helm (of The Band), Donald Fagen and the Dukes of September (w/ Michael McDonald and Boz Scaggs), James Hunter and jazz greats such as the late Andrew Hill, Jacky Terrasson, and the late bassist LeRoy Vinnegar.

A household name in the Hudson Valley, Brandon is known for his work with the band Restless Age featuring Lee Falco and Will Bryant. They have been a premier rhythm section throughout New York’s Hudson Valley for the past half-decade. As the house band for Amy Helm’s ‘Oh to be Home Again’ at Levon Helm Studios, they performed behind Donald Fagen, John Sebastian and Graham Nash, as well as being Kate Pierson’s (The B-52’s) touring band in support of her 2015 debut album ‘Guitars & Microphones’

Matt has been on the NYC music scene since 1994. He has performed with some of the best in the business, including Grammy winner, Vincent Herring, David Williams, Teri Thornton, Joel Forrester, Gary Versace, Ron McLure, Ben Monder, Ratzo Harris,  Ed Cherry, Jeremy Pelt, Steve Slagle and Jerome Richardson, among others. Since relocating to the Hudson Valley in 2017, Garrity has been producing Barnstock, a live concert series featuring recording and live streaming from his studio in Woodstock, NY.

Set in the great lawn amongst the natural cathedral of pines behind the 1911 renovated barn, this is an absolutely perfect, serene setting for live music. You have to see it and hear it to believe it!
SOCIAL DISTANCING

As our supply of seating is limited, we’d really appreciate if you could bring your own lawn chair or blanket. Thanks!
PLEASE WEAR MASKS UNTIL SEATED
BRING FOOD & DRINK
STREET PARKING
walk to top of the driveway
$20 SUGGESTED DONATION @ THE CONCERT
Concert address:
86 Baumgarten rd. Woodstock, NY
+ Google Calendar+ iCal Export