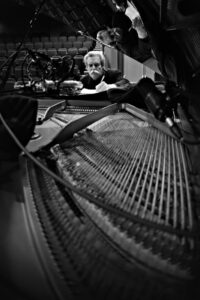 Joel Forrester is the composer of more than 1600 tunes, a versatile and accomplished jazz pianist, leader of his own quintet and prolific recording artist. He has performed in an extraordinary diversity of settings – from large ensembles to a duet setting with a tap dancer! His playing draws from stride, boogie-woogie, bebop, trance and what he likes to call ‘salon pieces’ but each composition bears the stamp of this most individual artist.
Joel composed the theme for National Public Radio’s “FRESH AIR with Terry Gross. The theme has been broadcast more than 200,000 times in the last three years – it’s been played and heard coast-to-coast more often than any other jazz composition in American radio (both public and private stations) for the last 28 years! The theme from FRESH AIR can also be heard on his Ride Symbol CD, “STOP THE MUSIC”, a collection that showcases Joel’s brilliance as a solo pianist.
Recognized by the Paris Free Voice as “the world’s leading accompanist to silent films”, Joel Forrester has given concerts with film in Paris at the Louvre, the American Center, the Forum des Images, and the Museé d’Orsay. For several years he performed with films in the Avignon Festival. In New York, he has played at the Film Forum, Brooklyn Museum, The Center for Photography, and Anthology Film Archives.
The band will feature Joel’s working quartet of the past 20 years. This band recorded an album for Ride Symbol Records entitled “About Time”
Joel Forrester- piano/ compositions
David Hofstra- bass
Vito Dieterle- tenor saxophone
Matt Garrity- drums
**THE CONCERT**
BARNSTOCK is a monthly jazz series in Woodstock, NY. Run by drummer Matt Garrity, the space is set in the top floor studio of of a renovated 1911 barn. It’s warm, intimate setting makes for the perfect listening room. Come hear some of the best musicians on the scene in the coolest house concert you’ll ever go to!
86 Baumgarten Rd. Woodstock, NY
STREET PARKING ONLY
2ND FL ENTRANCE
SUGGESTED DONATION @ THE DOOR
+ Google Calendar+ iCal Export