Barnstock is proud to present Teri Roiger, John Menegon, Peter Bernstein and Matt Garrity to the stage on Saturday, June 19 at 5:00pm. 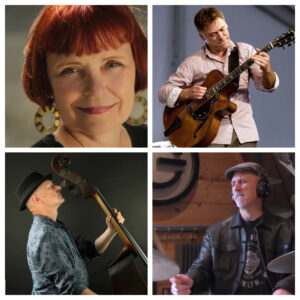 “Teri has an intuitive laid back sense of time reminiscent of Abbey Lincoln and Betty Carter but with her own uniqueness.” JACK DEJOHNETTE (legendary jazz drummer & NEA Jazz Master)

“Canadian-bred John Menegon is in the line of George Mraz and Michael Moore; a harmonically sophisticated bassist with technical facility who swings hard when it’s called for.” Kirk Silsbee, DOWNBEAT!

American jazz musicians Teri Roiger and John Menegon have been collaborating musically for over 25 years. During that time their music has taken many exciting twists and turns. Teri is a jazz vocalist, but also plays piano, composes music, and writes lyrics. John is a jazz bassist, but is also a guitarist, arranger, singer, and composer (music & lyrics). They have performed as a DUO throughout the U.S., Canada, Mexico, and Europe, and have been featured artists at the San Miguel Jazz Festival (Mexico), Panama Jazz Festival (Panama), and Bolzano Jazz Festival (Italy), where they presented concerts and masterclasses. The depth of their experiences and love of jazz is apparent when they bring all their talents to live performances, the recording studio, and through their moving lyrics and compositions. They have also been sharing their knowledge and inspiration with their diverse students for over 25 years. Their numerous recordings have all met with critical acclaim, as have their live performances at festivals and top New York jazz spots (Birdland, Kitano, Dizzy’s, Mezzrow, Jazz Standard, Café Bohemia). Teri and John recorded their first CD “Misterioso” with jazz legends Jack DeJohnette & Kenny Burrell. Their latest project to be released in summer 2021 features Pete Levin on keyboards, Nanny Assis on percussion, voice & guitar and Jeff Siegel on drums, as well as Teri on vocals and John on bass.

Teri’s latest release shines a new light on the many facets of Billie Holiday, the vocalist who provided the initial spark for Ms. Roiger’s commitment to a life in jazz. “Ghost of Yesterday, Shades of Lady Day” showcases Teri’s uncommon knowledge, appreciation, and deep love for Lady Day’s artistry, and was chosen by jazz critic Scott Yanow as one of the top 30 jazz releases in 2017. Her recording “Dear Abbey: The Music of Abbey Lincoln,” with arrangements by Menegon, also met with great critical acclaim.

John spent ten years playing and recording with jazz legends David “Fathead” Newman and Dewey Redman, and currently plays with jazz legend Joe Lovano as well as leading his own band. He has released five CDs as a leader, including “I Remember You” (a dedication to Redman and Newman) with a four-star review in Downbeat, and his latest “Quartet East: Blew By Blues,” a dedication to Charlie Haden.

“Teri is made for those who still understand the meaning of the term the real thing.” Stanley Crouch (Author & Cultural Critic)

Jazz guitarist Peter Bernstein has been a part of the jazz scene in New York and abroad since 1989. During that time he has participated in numerous recordings and performances with musicians from all generations. As a leader, Peter has released nine albums and a DVD. As a sideman Peter has appeared in groups led by Sonny Rollins, Bobby Hutcherson, George Coleman, Lou Donaldson, Dr. Lonnie Smith, Fathead Newman, Joshua Redman, Brad Mehldau, Diana Krall, Lee Konitz, Jimmy Cobb and many more. Current projects include his album, Monk, with Doug Weiss and Bill Stewart, a recently released solo record, Solo Guitar – Live at Smalls, and the highly acclaimed organ trio with organist Larry Goldings and drummer Bill Stewart.

Drummer Matt has been on the New York City music scene since 1994. He has performed with some of the best in the business, including Grammy winner, Vincent Herring, David Williams, Teri Thornton, Gary Versace, Ron McLure, Ben Monder, Ratzo Harris, John Stetch, Jeremy Pelt, Steve Slagle and Jerome Richardson, among others.

BARNSTOCK! -Set in the great lawn amongst the natural cathedral of pines behind the 1911 renovated barn in Woodstock, NY. This is an absolutely perfect, serene setting for live music. You have to see it and hear it to believe it!

WEAR A MASK 😷 until seated

walk to top of the driveway